An integrated weighing and tray sealing solution from Ishida Europe has enabled one of Spain’s leading fish processors to double throughput on one of its most popular and important product lines. The recently installed line at Gambastar, based in Burgos, Northern Spain, comprises a 16-head Ishida CCW-RVE waterproof multihead weigher, QX-1100 automatic twin lane tray sealer and DACS-G checkweigher, which is weighing and packing fresh langoustines into a number of different-sized trays. 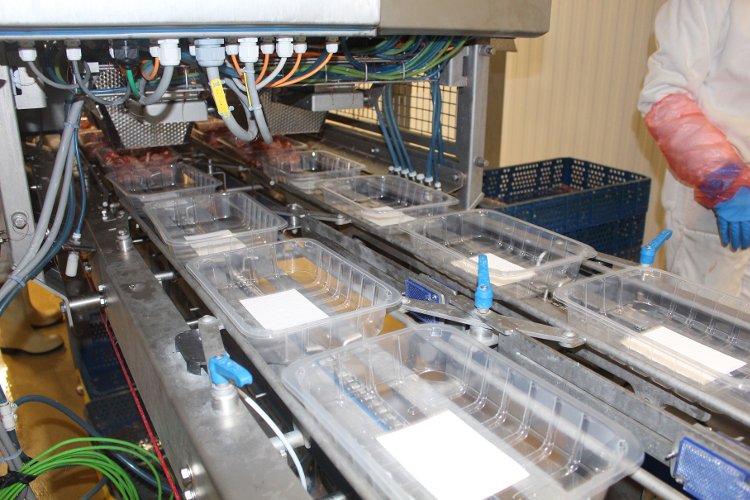 By replacing its previous linear weigher with the Ishida multihead, Gambastar has been able to increase line speeds from around 35 to 70 packs per minute. Equally important, the Ishida solution is delivering excellent accuracy - to within 2% of target weight on a typical 520g tray.

A particular benefit of the QX-1100 tray sealer is the single tool that is required for the three different tray sizes from 200g to 1kg. This means that changeovers between packs can take place within a matter of minutes with the corresponding settings quickly called up on the intuitive and easy to use remote control unit.

Product is fed to the weigher by a vibratory conveyor. From the dispersion table at the top of the CCW-RVE, the langoustines are transferred to the pool and weigh hoppers. It then takes a fraction of a second for the microprocessor to calculate the best combination of weigh hoppers to reach the target weight.

The selected product is transferred to a specially designed distribution system underneath the weigher. Trays are fed from a tray denester to beneath the weigher where dipping funnels ensure the complete and accurate placement of the langoustines. The trays are then fed into the QX-1100 tray sealer before receiving a final confirmatory weight check on the DACS-G checkweigher.

The Ishida DACS-G features an Ishida designed and manufactured, exceptionally fast and accurate, digital loadcell that is able to operate with great reliability in the harshest of environments, and can easily switch between weighing capacities and graduations, giving it the flexibility to handle the different pack sizes in the Gambastar range.

All three machines offer hygienic designs to enable Gambastar to maintain strict hygiene standards. In particular, the IP66 waterproof construction of the Ishida CCW-RVE is designed for a full washdown, while all contact parts can be quickly and easily removed and hung on a special wash wall next to the weigher for an even more in depth clean down.

The Ishida line was supplied by the company’s long-term partner in Spain, CIMA. Importantly Ishida was able to meet the strict delivery requirements of Gambastar to ensure the line was in operation by December in order for the company to satisfy its large order commitments during the busy Christmas period.

“What particularly attracted us to Ishida was the company’s ability to provide a fully integrated solution for this product,” explained Gambastar’s production manager Carlos Pineda. “Ishida was also prepared to guarantee that the line would be ready to meet our deadlines.”

The line was fully commissioned at Ishida’s headquarters in Woodgate, Birmingham prior to installation and the company provided full training for Gambastar. “We have been delighted with the performance and reliability of the line since it was installed,” confirmed Carlos Pineda. “We also very pleased to have localised support on hand through CIMA.”

Established in 2003, Gambastar is one of Spain’s fastest-growing seafood companies, currently handling around 9,000 tonnes of fish per year. The company produces a range of frozen, chilled and ready to eat products under its popular Gambafresh brand as well as for private label, primarily for retail customers but also for the HoReCa sector. Around 60% of product is for the Spanish market with the rest exported throughout Europe. Gambastar is committed to ongoing investment to support its continued growth and the recent Ishida line represented one of the company’s largest investments in packing equipment.