Heidelberger Druckmaschinen AG (HEIDELBERG) is completely revamping its Prinect print shop workflow, which will now be available in the cloud. The new workflow suite is called “Prinect Direct” and marks a further milestone on the way to autonomous production in print shops. All the new workflow’s functions will gradually be made available to customers in the form of cloud-based apps. 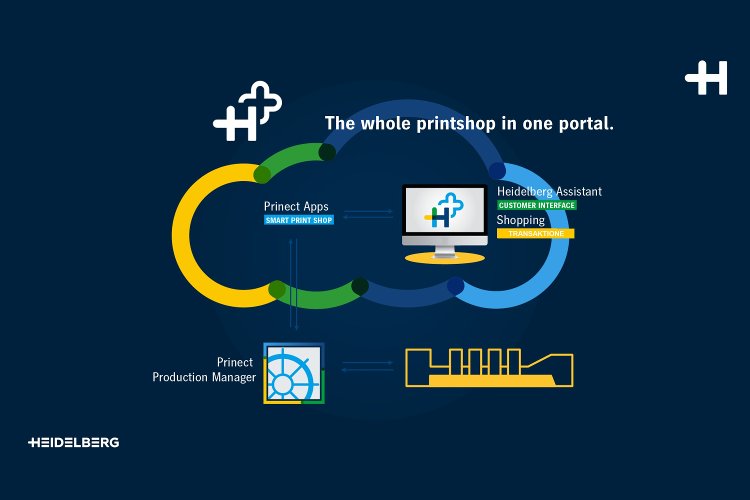 “With the new Prinect Direct cloud-based workflow, HEIDELBERG is moving a big step closer to autonomous production in print shops in line with our Smart Print Shop concept,” says Christopher Berti, Head of Software Solutions at HEIDELBERG. “The new Prinect apps eliminate most manual steps throughout a print shop’s production process – from job creation all the way through to delivery of the finished print product,” he adds.

Following the launch last fall of Print Shop Analytics, which customers can use to monitor their print shop’s KPIs in real time, HEIDELBERG is now unveiling its Smart Product App – the second Prinect app in the new Prinect Direct workflow. This app reliably automates job creation at the prepress stage without restricting design creativity or the possibilities of print production. For example, it includes a user-friendly cloud-based job creation function with automatic quality control of the PDF files produced.

The true innovation here is that besides the PDFs, all additional types of job data – referred to as the “product intent” – are also compared with each other. App users require no previous special know-how. The straightforward user interface guides everyone from print buyers to print shop staff intuitively through the job creation process to the PDF stage and, if appropriate, all the way to the approval of proofs. The aim is to ensure an error-free, clearly defined job (the “smart product”) – consisting of the print-ready PDF and the desired print product properties for automatic production – that is produced autonomously via the impositioned printing plates right through to the press. Prinect Direct uses the data stored during job creation to independently decide on the most cost-effective production process, so there is no need for print shop staff to actively make this decision.

The existing Prinect Production Manager software, which is compatible with Prinect Direct, still supports actual print production. At the time of the market launch, which is scheduled for the fourth quarter, the Smart Product App will be available for a large number of commercial products. It is envisaged that labels and packaging will be covered by subsequent versions.

Further Prinect apps will be introduced gradually over an extended period. The ultimate goal is to create a fully digitized and automated print shop – a true smart factory. Moving forward, the new Prinect Direct workflow will also put an end to the current separation between commercial and production processes, providing appropriate functions in a single workflow. This will make print shops more cost-effective and fully utilize their automation potential. Users can access the Prinect apps via the H+ customer portal, which was launched last year. Software updates take place over the air without interrupting print shop operations.

All existing Prinect customers can continue using their workflow system, including Prinect Production Manager. Both system environments are being enhanced, with the focus on new functions in Prinect Direct. All the other upcoming Prinect apps are compatible and use existing functions for applications such as printing plate output based on the Adobe PDF Print Engine. “The Prinect Direct innovations will add further value to the investments of our existing Prinect customers and give them investment security,” emphasizes Berti.

Heidelberg CFO Marcus A. Wassenberg moves to a new role